Best VR Headset |Top 5 VR Headset below $100: Virtual reality is now, well, an actual reality. We’re now getting ever closer to the complete retail release of the high-profile VR headsets like  HTC Vive, PlayStation VR, and Oculus Rift — and it looks like each week brings with it a new look.

Here comes the samsung gear vr at top when it comes best vr headset below 100$. The Rift isn’t the only available vr headset Oculus has put its effort behind. Samsung’s Gear VR has been also around in various forms for a while now, but the main consumer version would finally get full release in November. This final version of samsung gear vr will be compatible with the Note 5, S6, S6 Edge, S6 Edge and also will feature its own marketplace for games, videos, and apps.

Google Card board is ranking at second position when we talk about top 5 vr headsets. We might hesitate to call it a “headset” — after all, it is just a piece of cardboard construction. However, Google Cardboard is getting big props simply because it’s free. Just because of its low price and big brand google cardboard is hitting hard to its big companies. 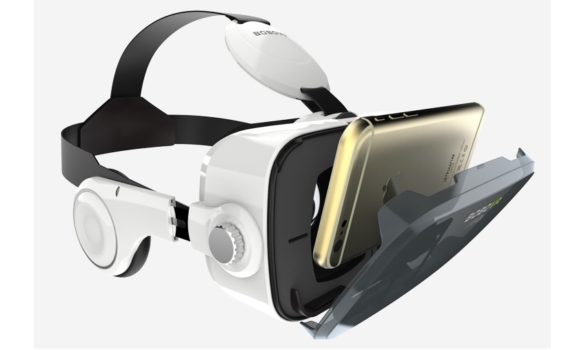 The BoboVR Z4, flaunts an amazing field of view of 120 degrees, comes with in headphones, a volume dial, and a control button.  It is also very light weight , easy to use, fits over your eye glasses, has a transparent cover for augmented reality, has openings for power and audio cables, adjustable lenses, and fits perfectly over smartphone covers.

Pico 1 got the same black-and-white color scheme and it even has a touch pad and a control button on its right side, just like the Gear VR. Cons is this that It doesn’t just work with Samsung phones, but with any late-model smartphone, except — for now — iPhones. pico 1 has a field of view of 96 degrees, same as the Gear VR, weighs 10.5 ounces, which is a little less than the Gear VR. It could also be a good option if you are looking vr headset below $100.

Freefly also comes under best 5 vr headsets under $100. This is also high-quality VR headset, like the Samsung Gear VR. Freefly VR Headset is compatible with a wide range of both iOS and Android devices. The FreeFly headset can also be adjusted for different phone dimensions and head sizes, and offers a 110-degree field of view designed for full immersion. It is indeed good for playing games.

“Let us know about your Top5 vr headsets in CommentBox”